Rig SR-60 in Olpe preparing the ground for the soldier-pile-wall.

Olpe in the Sauerland region, together with the neighbouring community Drolshagen, is one of the major business hubs in the east of North Rhine-Westphalia. For travellers is the region well known because of the motorway junction of the A4 from Cologne and the „Sauerland line“ A45 between Dortmund and Giessen.To make the town´s core more attractive, a construction project was started in 2013 in a prime location on the central Martinstraße. A project will result at about 3.300m² of additional residential and shop area. Under the building, a parking lot for 46 vehicles is also calculated into the same project, which is worth approximately 10 Mio Euro.After demolition of the old buildings a study of the soil started in April 2014. At the same time they begun to drill holes for the soldier-pile-walls. All together there were 59 carrier holes made up to maximum depth of 12 meters. The diameter of the casings was 750mm. U-profiles were used as a link and a carrier for the wall. For the structural reasons, each pile got anchored with the concrete foot. The ground consisted mainly of silty, dense gravel. A contract for this action was signed by a company DEMLER from Nethpen

For this particular job SOILMEC SR-60 rig was used. The rig itself is based on the technology of Caterpillar excavator 336E and is especially equipped for the Kelly method. The power head has a nominal torque of 190kNm. Upgrade of the pressure pipes onto KDK and Kelly tools represents no problems at all. As an advantages for high daily productivity a good drilling team and a high machine capability showed as a highlight. The telescopic undercarriage and the weight distribution of the machine provide for excellent stability in all situations, thereby enabling extremely precise work. The so-called "SPINNING OFF" method for emptying the auger Kelly proved in the inner-city area due to the low noise levels to be particularly suitable. 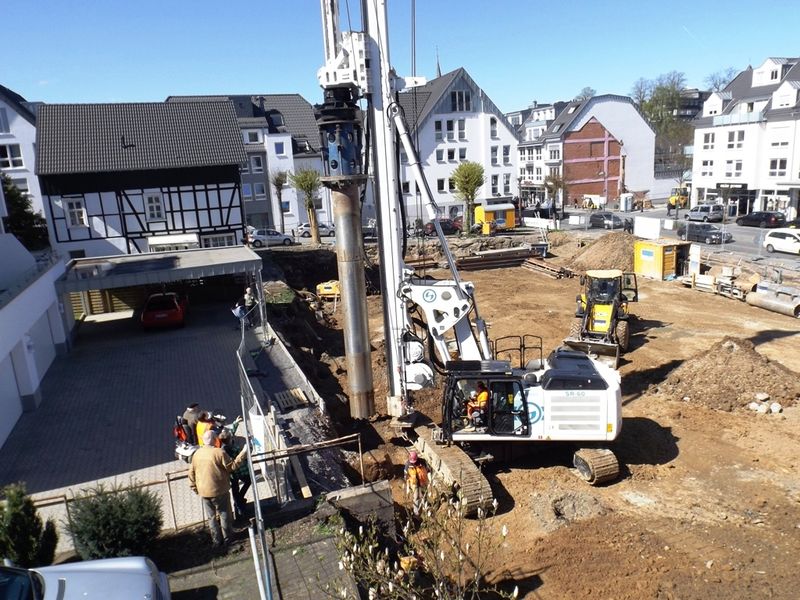